Elaine Shea, who stood up for abused women, dies at 80 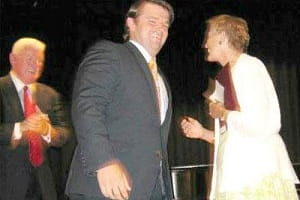 UPDATED, April 7: In the days following the May 2020 death of George Floyd under a police officer's knee in Minneapolis, Elaine Marie (Fitzgerald) Shea, a lifetime resident of Arlington, expressed support and concern for efforts to oppose racism here.

In a June 1 opinion piece titled "Embrace diversity without divisiveness," she wrote: "In this past week, the need to address these issues has been front and center. How we choose to move forward as a town to achieve these goals is critical to the process and the outcome: a civil tone is what we need."

Shea, known for her work to support battered women, died at home March 29, surrounded by her six children. She was 80.

In 2012, she was among those onstage at Town Hall to honor Arlingtonians. Among those recognized was Bill, her husband, who died in 2012.

In her 2020 column, she wrote: "In my work with women who have known domestic violence, I have encouraged the women to find their voice when their gut tells them something doesn’t feel right."

'Need to be UPSTANDERS'

Reflecting her views as a founder of First Step, an Arlington program opposing domestic violence, she wrote, "I believe we all need to be UPSTANDERS, one who stands up for a cause or belief. I have been passionate about the term since I first heard it expressed by a Polish woman who spoke at Robbins Library in 2014. She told of how most of her family members were killed by the Nazis, but she and her siblings were saved by UPSTANDERS, brave and compassionate people who stood up for what they believed was right and took them into their home as their own family."

An obituary provided by DeVito Funeral Homes said, "Elaine touched many lives. She had an extraordinary capacity to connect with people in a caring and authentic way.

"She showed her love and appreciation for others by writing poems and books, giving lots of hugs, and sharing her famous chocolate chip cookies.

"Elaine was dedicated to helping people find their voice, which inspired her to be one of the founders of the First Step domestic violence support group in Arlington."

A graduate of Matignon High School, Newton College of the Sacred Heart and Boston University School of Social Work, where she earned her Masters while raising six children, she "had a special place in her heart for so many people and places, including her Lincoln Street neighborhood, where this past year she initiated weekly outdoor gatherings to inspire hope during the pandemic.

"Elaine was proud to be from Arlington and worked to make it a community of upstanders who look out for one another. She modeled how being grateful, helping others, and being true to oneself leads to a happy and fulfilling life.

She was the mother of William J. and wife, Me,g of Belmont; Michael and wife, Jane, of Reading; Taryn LaRaja and husband, Ray, of Amherst; Katlyn Shea of Lincoln; Meghan Shea and husband, Brian Pendleton, of Arlington; Kristen Donahue and husband, Micah, of Newburyport.

She is survived by many cousins, nieces and nephews, and her brother Richard and was predeceased by her brothers Arthur and Neil.

Relatives and friends are invited to visit in the DeVito Funeral Home, 1145 Mass. Ave., on Monday, April 5, from 3 to 7 p.m., and to her funeral Mass at 10 a.m. Tuesday, April 6, in St. Camillus Church. Please meet directly at church.

All attendees are required to wear face coverings, practice social distancing and pay their respects and exit the funeral home promptly to allow other guests to enter. A limited number of guests will be allowed in the building at one time.

January 2012: Arlington bestows accolades on those who have given much

This news summary was published Saturday, April 3, 2021, and updated April 7, to add link.