The Humble Worshippers get all hands clapping at Herb Reed's funeral at the Regent Theatre.

Funeral a first for Regent

In its nearly 100-year history, the Regent Theatre has held tributes to countless bands, but it has never staged a funeral. The one for Herb Reed, the last surviving founding member of the Platters, until he died June 4, was a genuine tribute framed by music true to his legacy.

About 250 people joined the three-hour service at the Regent on Saturday, June 16, to say goodbye to Reed, an Arlington resident since the 1970s and a force behind the vocal group since the early 1950s whose musical artistry soared beyond doo wop.

"Only You," "My Prayer" (said to be Reed's favorite), "16 Tons" and "The Great Pretender" -- these are among the Platters' best-known early hits among 400 records. Rendering them was no tribute band, but the true sound of Herb Reed's Platters -- Billie Cox, Wayne Miller, Angela Allen and Efrain "Frank" Pizarro, directed by Michael Larson.

At the close of "Pretender," Cox broke down in tears, was comforted by the rest of the Platters and then completed the song.

The emotion behind the moment has a meaning for beyond the 1955 hit, evoking to the years of legal struggle that Reed and others fought to make sure their music was not copied by pretenders. 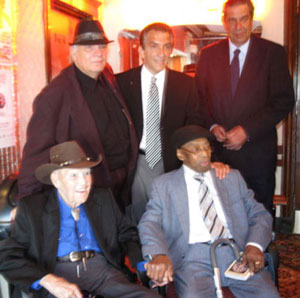 If Reed were alive, Bauman noted, he would have said, "What a crowd!" He was referring to the diversity among those present, a mixed crowd but one with more whites than blacks.

Bauman lauded the Platters' music, built on the foundation of Reed's bass voice, a building block that brought black music to white audiences.

"That is the legacy of Herb's music," he said, before singing his own bass version of the conclusion to the Marcels' "Blue Moon": "... ding-a-dong-ding ... we love you, Herb Re-e-e-ed."

The Rev. Dr. Regina E. Shearer, pastor of Zion Church Ministries and assistant vice president of academic affairs at Rivier College, offered another musical dimension. In a black robe with a silver cross at her breast, she sang a jazzy version of "When a Hero Comes Along."

Her voice, still strong, had a vibrancy that recalled her days, from 1969 to 1983, when she was known as "Regina Coco" and sang with the Platters.

A surprise visitor was Didier Morissonneau, who flew down from Montreal that morning. He has written what is said to be the definitive biography about the Platters, to be published in French in November.

Emphasizing the Platters' international appeal, he noted that when Elvis Presley commanded the U.S. pop charts in the late 1950s, Reed's group was No. 1 in 36 countries.

Terry Stewart added his Alabama accent to the proceedings. As president of the Rock and Roll Hall of Fame and Museum in Cleveland, he was there, in part, because the Platters have been members of the Hall since 1990.

"I worry about the future of vocal groups," he said. "They are disappearing."

Before and after these remarks, the Berklee Reverence Gospel Choir, led by Dennis Montgomery, and the Humble Worshippers sang and clapped -- and had the feet of the audience moving, too.

The ceremonious occasion did not reveal much about the personal side of Reed, who fled poverty in Kansas City, Mo., at age 15 and went to Los Angeles with $3. Balboni referred to "Herbisms," but avoided details. A comment on how picky Reed was about food drew chuckles from the audience.

At the close of the service, Reed received full military honors, reflecting his service during the Korean War.

The Regent has 500 seats. One present said the crowd was not as large as it might have been and lacked many of Reed's friends, who were likely engaged in playing gigs. "Saturday is not a day for a musician's funeral," he said.

Leland Stein, manager of the Regent, said the theater has not had a funeral since it opened in 1916. "Only our own," he said, joking. He noted that Reed and the Platters had played the Regent about seven years ago.

On the screen at the Regent was an image of the original Platters with Reed larger than the five others. A small subheading said, "Reunited June 4, 2012," the day Reed died at age 83.

Those present expect the music to live on.

“Alex” Francis with Charlie. The owner of a new shop in Broadway Plaza hopes hungry mutts will find…

Wally greets Marianne Comeau at Del's. UPDATED May 21: You may have seen Marianne Comeau doling out paddles for canoes at Spy Pond in summers past. Or at the Ed Burns rec center working with kids. Or simply jogging around town, something she has done since 1979. The affable friend to police…

Local artists are invited to submit artwork for…

UPDATED May 18: Arianna Stoughton, a junior at…

On May 7 a group of Arlington artists flocked to…

Covid cases rise 429 since May 6; rapid antigen tests next week

Construction of new AHS: Through week of May 30

In front of mobile training center in 2021 are, from left, Select Board member Eric Helmuth, Town…

May is Stroke Awareness Month According to the CDC, every year more than 795,000 people in the…

Covid cases rise 429 since May 6; rapid antigen tests next week

Textiles, mattresses must be recycled after Nov. 1

Whittemore Park: The old ...... and the renewed, with phase 2 to come. UPDATED May 11: Construction…

Raitt Jennifer Raitt, director of planning and community development since 2016, has accepted the…

Select Board May 26: Proposed 40B, overnight parking pilot

Arlington Patch has been reporting about the town since 2010. The national site with local outlets…