Your View (site blog, not mine personally)

Your View is the place for opinion at YourArlington.com. It is the site's only blog. Please submit your opinions to be considered for publication on this site. The best opinions are those supported by facts. You cannot expect to be published if your views lack factual support or if you make personal attacks. For your views to be published, your full, real name is required.
Font size: + –
Subscribe to this blog post Unsubscribe
Print
4 minutes reading time (745 words)

UPDATED Oct. 1: Precinct 13 Town Meeting member Kristin Anderson, who is monitoring the combined sewer overflows into the Alewife Brook, provided this update via her blog, Save the Alewife Brook.

Join the group to march at HONK!Fest, Sunday, Oct. 9, starting from Davis Square at 11 a.m. RSVP for the parade >>

Join us, to demand a safe, clean and restored brook, for all species who live in and around the Alewife Brook.

Puppeteer Sara Peattie has created large, colorful fish puppets, and, to lead the group, Big Blue, the Goddess of Clean Water. Wear a free Save the Alewife Brook t-shirt and carry a "ghost fish" when you join us in the parade.

Cecily Miller from Arts Arlington has made this video to explain the HONK!Fest and Elm Street Arts table.

The Environmental Protection Agency’s mention of dredging the Alewife Brook in its response to the Massachusetts Water Resources Authority’s April 2022 draft scope for the new CSO control plan has revived the discussion about the role removing sediment from the Alewife Brook can play in restoration and flood prevention efforts.

The EPA recommends MWRA include dredging the Alewife Brook as part of the alternatives analysis for the new Control Plan. 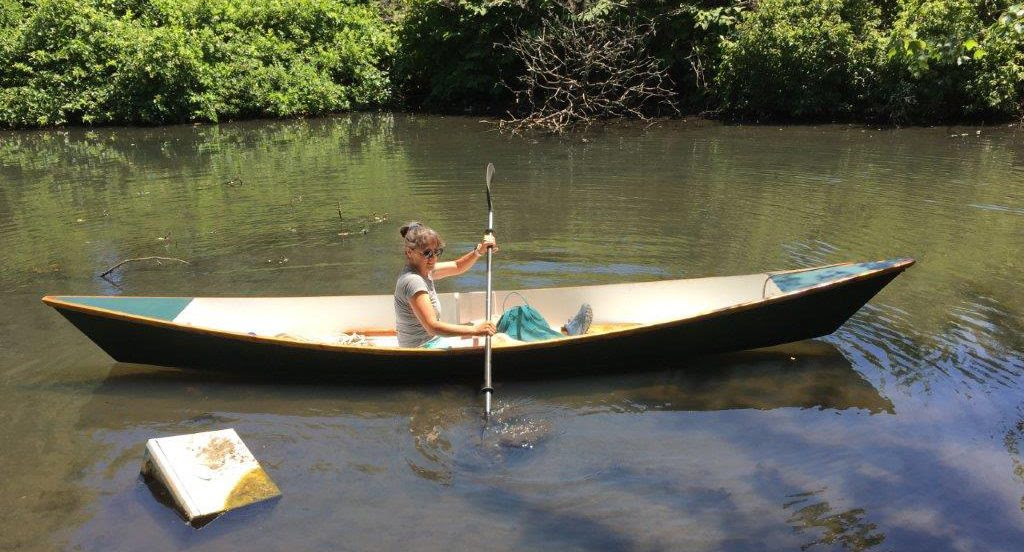 On the Alewife July 9, Kristin Anderson sets out to measure sediment depth.

Elimination of combined sewer overflows and sewage pollution in the brook must be achieved through continued sewer separation in Cambridge and Somerville.

But sewer separation means removing stormwater from the sanitary sewer system. Once it’s removed, that stormwater has to go somewhere, and that somewhere is the Alewife Brook.

Increasing the amount of stormwater flowing to the Alewife Brook could increase the threat of area flooding. Therefore, flood mitigation measures must be taken alongside sewer separation.

The EPA suggests that one way to accommodate an increase in stormwater would be to increase the Alewife Brook’s storage and flow capacity by dredging the channelized portion of the brook.

In its response letter, the EPA quotes a 2005 U.S. Geological Survey study that estimated sediment volume in the Alewife Brook at approximately half a million cubic feet. In 1988, one of many moments when the idea of dredging the Alewife was floated, the Metropolitan District Commission (MDC – precursor of both MWRA and the Department of Conservation & Recreation) commissioned a study to determine what was in the sediment. This was necessary to determine how to dispose of the dredged material. When testing indicated that the material was toxic enough to require disposal at a Certified Waste Disposal Site, the MDC’s enthusiasm for dredging faded. If EPA are now endorsing consideration of dredging, then it may be an idea whose time has finally come.

Our Measurements Suggest a Doubling of Sediment Since 1988 Save the Alewife Brook's David White and David Stoff reel in the Alewife's "catch-o-the-day": a microwave oven.

On a fine summer day in July, three members of Save the Alewife Brook set out to measure the depth of sediment at the 1988 testing sites. Equipped with a precision hand-crafted measuring tool – a 5-foot steel rod with a ruled scale ground onto it – and a hand-built canoe. We dropped the boat in at John Wald Park in Cambridge.

It’s no surprise that the amount of sediment has increased since 1988, given three decades of sewage discharges, and infrequent removal of branches and trash. At the center of the Little River opposite MWRA’s CSO MWR003 (‘CCSO’ on the map), our tester measured a sediment depth of approximately 36 inches. That’s double the 18 inches recorded in 1988. Further upstream, adjacent to 20 Acorn Drive (‘AB03’), the sediment measurement was 48 inches. That’s an increase of 18 inches over the 1988 measurement.

Now is the time to consider dredging the Alewife Brook. Removing the sediment could provide immediate benefits in terms of capacity, flow, and improved water quality. Federal Infrastructure Law funds can get this done.

Community
Help the Arlington Commission of Arts and Culture plan more murals by answering this short survey. Hundreds of people have commented on how much they love the new native-plants and pollinators mural by Sophy Tuttle and ACAC's climate futures interns. Now, thanks to a $50,000 transformative growth grant from the Town of Arlington, the commission is planning to create a few more and seek community input. Please take 3 to 5 minutes to fill out a quick survey here ...
Read more

Politics
The state Sen. Cindy F. Friedman (D-Arlington) has reported in an email to constituents a recap of the legislation addressed during the formal sessions of the 2021-2022 Massachusetts Legislature.  Formal sessions – where the Senate usually address bigger, more complex issues and take roll-call votes on the most important legislation – wrapped up July 31. Friedman highlights bills she sponsored "or am very passionate about," with a link to a 50-page complete session report fro...
Read more

Development
UPDATED Oct. 1: The Coalition to Save the Mugar Wetlands has set an initial target of $50,000 to support the efforts of the residents of East Arlington who filed suit last year to prevent the construction of Thorndike Place, a 124-unit, four-floor rental building near documented wetlands. Since June 30, the group has raised $13,955. The neighborhood fair and yard sale set for Oct. 1 has been postponed to Saturday, Oct. 15, with a rain date of Sunday, Oct. 16. Arlington Town Meeting and the ...
Read more

Poetry
UPDATED Sept. 30: Steven Ratiner, Arlington’s poet laureate, sought submissions in February 2020 from Arlington residents to contribute to "a rather unconventional, utterly delightful way to inject poetry into the everyday." It was to remain secret until its debut during April’s National Poetry Month. Then the coronavirus hit. In June 2021, he offers Red Letters 3.0. PUBLISHED:  I was asked to write an essay for Askold Melnyczuk’s Arrowsmith Journal about what I learned from the first ...
Read more

Letters to the editor
Judith Garber of Arlington submitted this letter to the editor: If you love comedy, music, and fantasy, then you will love the Arlington Friends of the Drama performance of “Iolanthe.” When I wasn't laughing throughout the show at the lyrics and delightful physical direction, I was in awe of the acting talent and the gorgeous voices on display. I am excited to see more shows at AFD after such an entertaining performance that combined fairy magic with romance and political satire.
Read more

Share how you use Medford St. to aid roadway design

Town Hall
The town is studying alternatives for restriping Medford Street, following the repaving work completed by the Department of Public Works last summer. The community is invited to share their feedback on how they utilize Medford Street, and what they’d like to see regarding safety and usage improvements.  Take the survey >>
Read more

Reviews
UPDATED Sept. 24: Judith Pfeffer, affiliated with YourArlington since early 2019, was raised on Greek mythology, Tom Lehrer songs and Gilbert and Sullivan. She first saw a professional production of “The Mikado” while in third grade. With the assistance of her parents, she had previously submitted to the producers a request for a line change as a call-out to a then-popular television show, but it was not adopted. Arlington Friends of the Drama has started out strong in their yearlong celebration...
Read more

Town Day
UPDATED Sept. 22: Town Day on Sept. 17 was much more than a win-win. Depending on your perspective, the day had at least four wins. Consider: Five participants at YourArlington's booth each won a $25 gift certificate for correctly answering a five-question quiz about Arlington news (answers and names below). The site, the town's only online independent news source that pays reporters to write about the town, announced in a booth display that it has won a $15,000 federal grant. The funds will be ...
Read more

Media
ACMi, Arlington's cable-TV station, wants you on its team. Jeff Barnd, the news director, makes his pitch for participation by showing you what you can be with clips illustrating the stations where he has delivered news and the news makers he has interviewed. See the changes over the years, but don't let the high-profile name deter you -- let them inspire you to find ways to help the station.
Read more

Letters to the editor
YourArlington's policy about letters to the editor UPDATED Aug. 13: YourArlington welcomes opinions of all kinds from local residents, including national issues so long as you can draw a local connection. For example, the U.S. Supreme Court's ruling in June on Roe v Wade must have echoes here, too. Letters are reviewed for fairness, factualness and taste. This site welcomes letters about any issue that stirs the public mind. Longer opinion pieces are also welcome. NOTE: When email...
Read more

The Arlington Chamber of Commerce announcement: 'Finance Essential for Small Business,' with…

Sue and Jeff Thompson face trials, keep smiling. UPDATED Oct. 1: On July 19 it was one year since Jeff Thompson was diagnosed with ALS, and during that time his condition has worsened. But he and his wife, Sue, have learned some important lessons: Be prepared before the next thing happens so you’re…

Coffee with a cop Wednesday at Kickstand

The local council of the MCC. UPDATED Oct. 1: Up…

Check out the latest updates from the Rainbow…

Farmers' market to take place from 2 to 6:30 Wednesday

Watch ACMi's video of the farmers' market. The…

Coffee with a cop Wednesday at Kickstand

National Coffee With a Cop Day is Wednesday, Oct. 5. Join members of the Arlington Police…

The Middlesex Sheriff’s Office is offering free, weekly written exams for those interested in…

Construction of new AHS: Through week of Oct. 3