News: Oz, McCormick locked in tight race in high-stakes
Pennsylvania GOP primary that could shape control of the Senate

Your View is the place for opinion at YourArlington.com. It is the site's only blog. Please submit your opinions to be considered for publication on this site. The best opinions are those supported by facts. You cannot expect to be published if your views lack factual support or if you make personal attacks. For your views to be published, your full, real name is required.
Font size: + –
Subscribe to this blog post Unsubscribe
Print
5 minutes reading time (937 words)

YourArlington introduces you to Steve Poltorzycki, an Arlington resident who writes about what he sells -- local real estate.

Prices per square foot also rose in 2018 versus 2017 (6%), indicating continued market strength across all sizes of single-family homes, from smaller to larger.

Arlington single-family home median prices have risen by 60% since 2012, a rate of price rise that makes Arlington one of the hottest real estate markets in the Boston area. 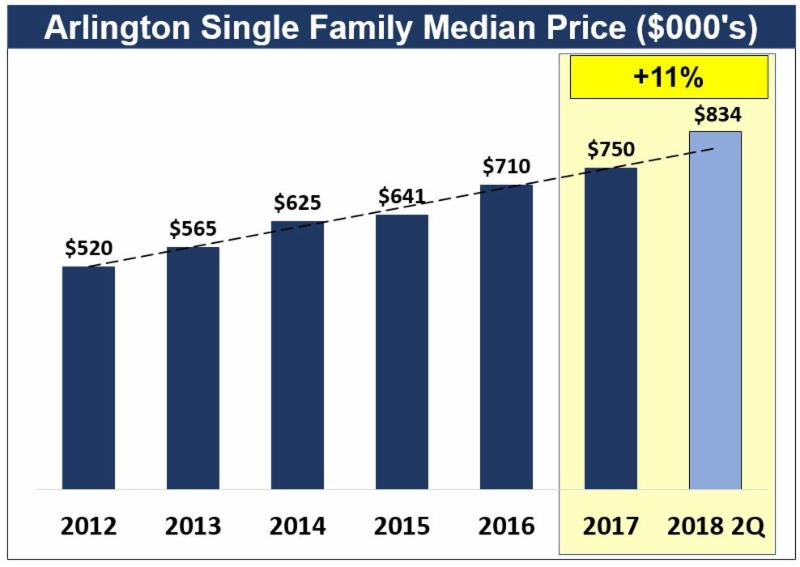 After a momentary step back in 2015, days on market (DOM), a good measure of the strength of buyer demand, continued their downward trend from 2016 through 2Q 2018 (the shorter the time, the greater the buyer demand).

Twenty DOM during 2018 indicates that homes were on market for only a short week or two before they went under agreement. The strength of buyer demand in Arlington in the first half of 2018 surpassed that of neighboring communities such as Belmont (23 DOM), Somerville (35 DOM), Lexington (39 DOM) and Winchester (56 DOM).

Another key measure of buyer response to the market is by how much actual sales prices exceed (or fall below) asking prices. Arlington single-family homes in the first half of 2018 sold on average for 5% over asking price, reflecting extraordinarily strong buyer demand.

Buyers don't pay more than asking price unless they face stiff competition from other buyers for the same property. 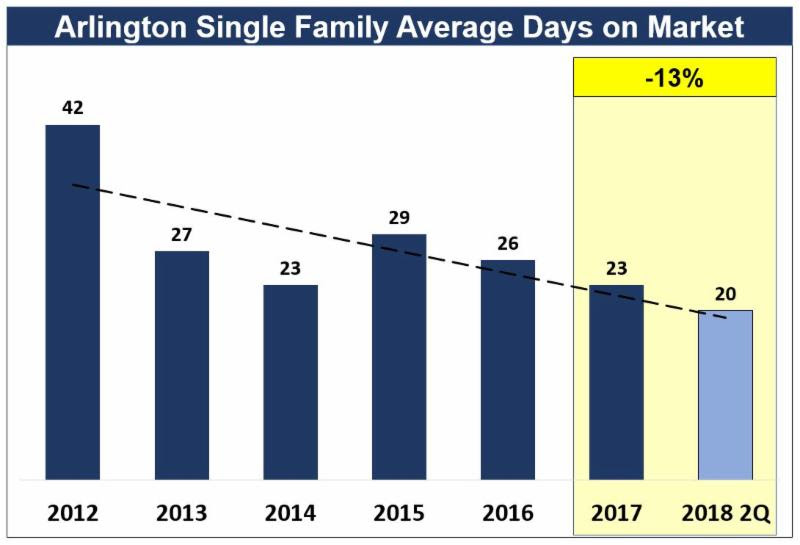 Inventory levels may be increasing

Arlington homes are a good value 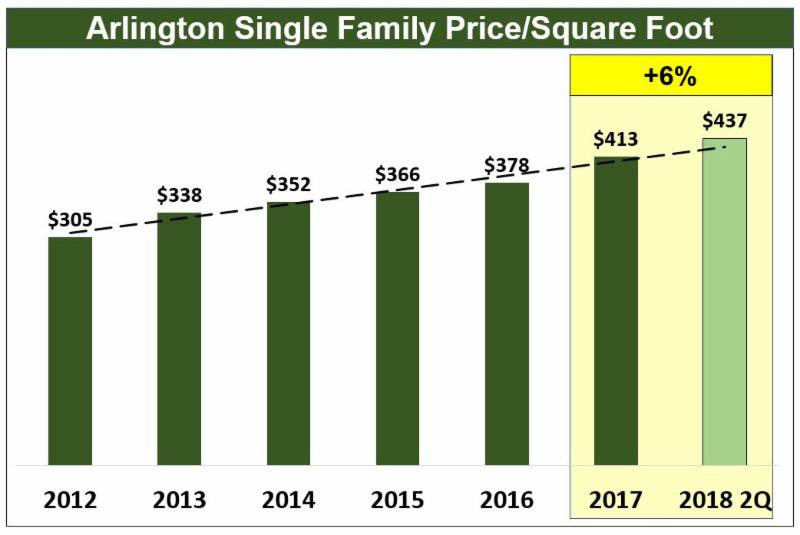 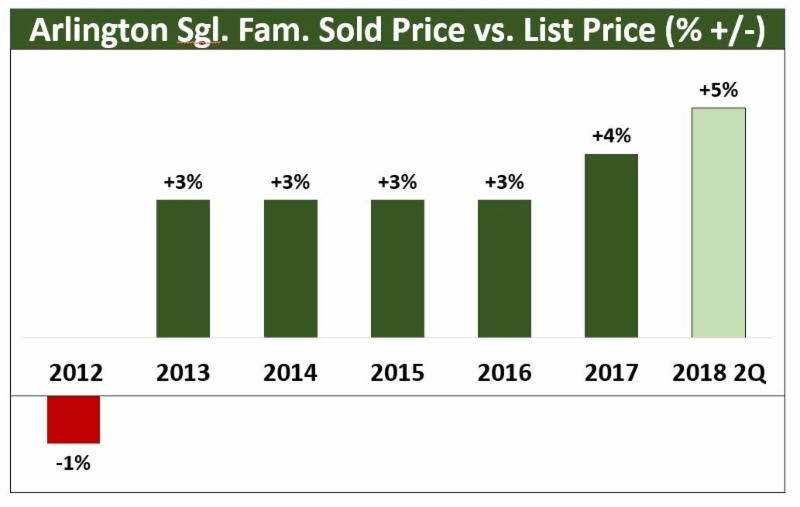 Another point of note for home owners is that the average size of house sold in Arlington has been considerably smaller than in all other nearby communities that have higher median sales prices. It may be that the lower sales prices in Arlington are more due to house size than to other factors, such as location. In that case, it may be advantageous for owners of smaller homes in Arlington to consider investing in renovation and expansion projects that could pay off when the home is sold down the road.

Sellers of single-family homes in Arlington are enjoying one of the stronger seller's markets in the Boston area, with prices continuing to rise steadily. 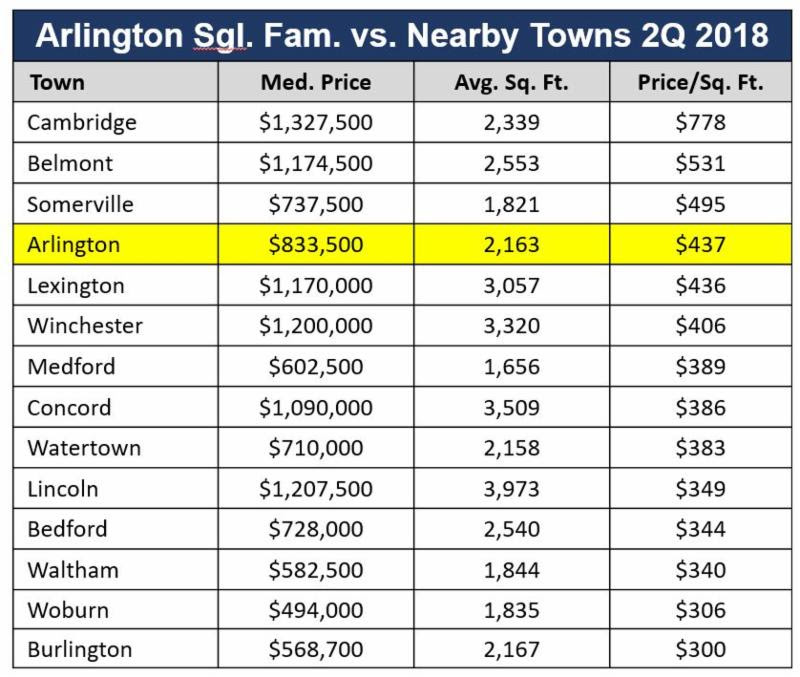 Of course there is no guarantee that home prices will continue to go up. Rising interest rates, a stock market correction, and local factors, such as a potential Proposition 2 1/2 override (raising Arlington property taxes in the face of an anticipated budget shortfall in 2020) and the large debt exclusion that will be need to pay for the high school building project, could have a chilling effect on Arlington home prices. Given the record prices homes are fetching on the market, owners thinking of selling might want to lock in gains by selling sooner rather than later.

Buyers looking for a single-family home in Arlington will continue to face a seller's market, often with several buyers competing for the same property. Buyers need to be prepared to move fast and put in competitive offers with as few strings attached as feasible. But, despite rising prices and tight inventory, Arlington per square foot prices are a relative bargain compared to Cambridge and Somerville. 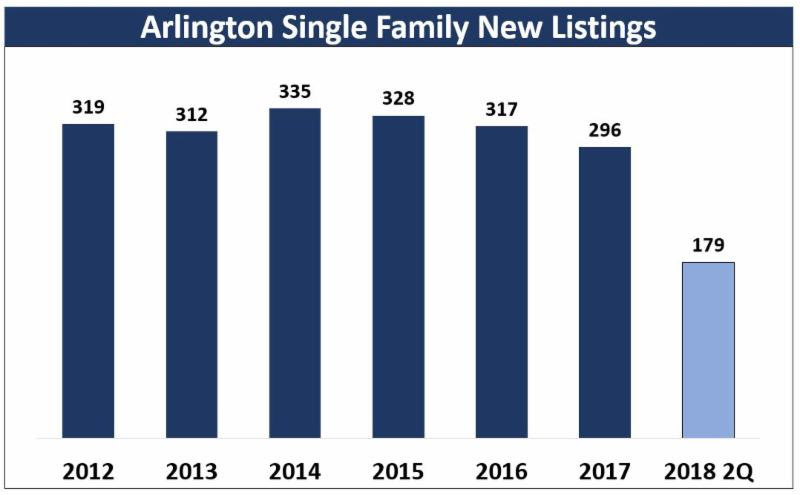 Data were collected from MLS PIN and MAR and do not include private transactions. CENTURY 21 Commonwealth and its sales agents make no representation as to the accuracy of the data and are not responsible for any actions taken as a result of use of or reliance on this information.

This column of information by Steve Poltorzycki was published Tuesday, July 24, 2018. Please email him at This email address is being protected from spambots. You need JavaScript enabled to view it. if you would like to receive similar reports that he prepares for other nearby towns, including Belmont, Lexington and Winchester.

Environment
Worst Offender: Somerville’s SOM01A combined sewer overflow. UPDATED May 14: Precinct 13 Town Meeting member Kristin Anderson, who is monitoring the combined sewer overflows into the Alewife Brook, provided this update. Ellen Mass of Cambridge, former president, Friends of Alewife Reservation, wrote this letter of support. Dear water protectors to Save the Alewife Brook, After 20 years, your water quality campaign for watershed conservation is a great boon to the residents of the Alewi...
Read more

Poetry
UPDATED May 13: Steven Ratiner, Arlington’s poet laureate, sought submissions in February 2020 from Arlington residents to contribute to "a rather unconventional, utterly delightful way to inject poetry into the everyday." It was to remain secret until its debut during April’s National Poetry Month. Then the coronavirus hit. In June 2021, he offers Red Letters 3.0. PUBLISHED:  I was asked to write an essay for Askold Melnyczuk’s Arrowsmith Journal about what I learned from the first ye...
Read more

Letters to the editor
YourArlington's policy about letters to the editor UPDATED May 8: YourArlington.com welcomes opinions of all kinds from local residents, including those about the U.S. Supreme Court's view of Roe v Wade. Letters are reviewed for fairness, factualness and taste. This site welcomes letters about any issue that stirs the public mind. Longer opinion pieces are also welcome. NOTE: When emailing a letter to The Advocate, consider copying YourArlington at the same time. Your opinions will be publi...
Read more

Rights
Arlington town and school employees participated for a second year in sessions by YW Boston’s 2022 Stand Against Racism campaign aimed toward expanding knowledge about race and equity. Throughout April, the town’s Diversity, Equity and Inclusion Division was the host for four separate virtual sessions. The purpose of the Stand Against Racism campaign is to spread awareness and inspire action to eliminate racism. Sessions held empowered employees to broaden their knowledge of racism and...
Read more

Film
This review by Tom Meek was originally published in Cambridge Day, a YourArlington partner. Film Ahead is a weekly column highlighting special events and repertory programming for the discerning Camberville filmgoer. It also includes capsule reviews of films that are not feature reviewed.  Local focus The Independent Film Festival Boston wraps up its phenomenal 19th run at The Brattle Theatre this week. For tickets and information, see The Brattle website. It’s “May...
Read more

world
UPDATED April 22: The Arlington Human Rights Commission, the Disability Commission, the LGBTQIA+ Rainbow Commission and the Diversity Task Group of Envision Arlington on Friday, March 18, issued the following statement on the war in Ukraine:  We support Ukraine and everyone affected by the Russian invasion. As of this writing, more than 3.2 million people have fled Ukraine to neighboring Poland, which has taken in 1.9 million refugees, as well as Romania, Slovakia, Hungary an...
Read more

Town of Arlington to LGBTQIA+ students: You belong

Rights
Submitting the following news summary including opinion about a community conversation were Susan Ryan-Vollmar, cochair of the LGBTQIA+ Rainbow Commission, and Christine Carney, cochair of the Human Rights Commission.Dr. Roderick MacNeal at community conversation. We’re only a quarter of the way through 2022, but the year has already been a tough one for LGBTQIA+ people, especially transgender children and adolescents and their parents. Lawmakers across the country have filed a record-break...
Read more

The Arlington Chamber of Commerce announcements: Join us for the complimentary Small Business…

Wally cuts the ribbon at Del's as Comeau and Rep. Sean Garballey are among the participants.…

Panels in the 57-year-old building 'dated.'-- Jack Nagle The Arlington Housing Authority (AHA) in a…

Tony and Jeff Whittemore head for Montreal. / 1967 family photo UPDATED April 29: In 1967 two young boys and their beloved pony took off on a monthlong adventure that brought them fame, fun and a wealth of great stories. Tony Whittemore, 11 at the time, and his brother Jeff, 9, drove a pony cart…

On May 7 a group of Arlington artists flocked to…

Preview of panels featured in the Dallin Museum’s…

Construction of new AHS: Through week of May 16

One '22 merit scholarships winner from Arlington

May is Stroke Awareness Month According to the CDC, every year more than 795,000 people in the…

Whittemore Park: The old ...... and the renewed, with phase 2 to come. UPDATED May 11: Construction…

Raitt Jennifer Raitt, director of planning and community development since 2016, has accepted the…

Housing authority board to meet Thursday

Redevelopment Board May 16: Hearings 34 Dudley, 89 Alpine

Arlington Patch has been reporting about the town since 2010. The national site with local outlets…