Your View is the place for opinion at YourArlington.com. It is the site's only blog. Please submit your opinions to be considered for publication on this site. The best opinions are those supported by facts. You cannot expect to be published if your views lack factual support or if you make personal attacks. For your views to be published, your full, real name is required.
Font size: + –
Subscribe to this blog post Unsubscribe
Print
1 minute reading time (156 words)

Under the headline "Arlington largely cut off from Alewife T under MBTA proposal," he writes: "The 350 bus, running once per hour from Alewife to Burlington via Arlington Center, and the 62, would be the only connections to Alewife from Arlington if a new bus plan for the T goes into effect.

"The plan, part of a system-wide revamp of bus networks, also includes some new routes through Town, such as a bus from Arlington Center to Newton that runs though Belmont and Waltham.

"The agency is accepting comments on the plan though at least late July."

Here is the MBTA's plan for Arlington >>

This blog, which includes news and opinion, was published Tuesday, May 17, 2022.

Neighbors
Carey M. Theil of Arlington submitted this obituary. He is executive director of GREY2K USA Worldwide, a nonprofit that works to pass stronger greyhound protection laws and end the cruelty of dog racing. A greyhound named Brooklyn, who inspired the successful international campaign to close down the worst dog track in the world, died June 22 in the Boston area. Brooklyn was born on Dec. 10, 2008, at a breeding farm in New South Wales, Australia. After failing as a racer in 2010, he was shipped t...
Read more

Poetry
UPDATED June 24: Steven Ratiner, Arlington’s poet laureate, sought submissions in February 2020 from Arlington residents to contribute to "a rather unconventional, utterly delightful way to inject poetry into the everyday." It was to remain secret until its debut during April’s National Poetry Month. Then the coronavirus hit. In June 2021, he offers Red Letters 3.0. PUBLISHED:  I was asked to write an essay for Askold Melnyczuk’s Arrowsmith Journal about what I learned from the first y...
Read more

Environment
The following viewpoint about owls and rat poison was written by Liz Reisberg, in collaboration with Carol Band, Dana Cooperson and Peggy Gardiner. In photo, Diane Welch, the town's animal-control officer, at the May Spring Fling, tells kids about owls. When two Great Horned Owls courted, nested and produced two babies in Menotomy Rocks Park, visitors to the park were thrilled. Many in the neighborhood came daily in the hope of an owl spotting and watched with great pleasure as the fledglings be...
Read more

The letters on the counter: a personal story

Community
Sheri A. Baron, at right, a Precinct 7 Town Meeting member, wrote the following essay, recollections of her late parents: Tell people how much they mean to you – now. Tell them often, knowing that life can change without warning. Hug them, show them affection. If you are a distance away, send a text, an email or a letter. Just do it and send it, or you will have regrets. I know because I do. I lost my mother 15 years ago. I sometimes need to  think a moment to land upon the ...
Read more

Letters to the editor
Submitting this letter to the editor about housing was Alejandro Paz of Marathon Street. Katie Mogg’s article on Arlington’s housing crisis ("Arlington is facing a housing crisis: Experts, residents explain their views") struck a nerve with me as an Arlington resident who worries about the increasing challenges around housing costs here and around the state. I recently moved to Arlington for the second time, having previously lived on Brattle Street about a year ago. As Mogg’s article describes,...
Read more 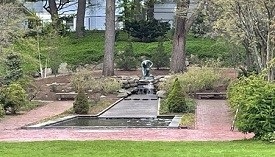 Celebrate Robbins Gardens: Listen to history; go beyond it

Fund-raising
The echoes of the Olmsted family call Arlington to a garden party on Friday, June 17, from 6:30 to 9 p.m. Of course, the Friends of the Robbins Town Gardens have sent the invitations. Go. Learn more about the wondrous floral space between Town Hall and the Robbins Library. Hear live music from the What She Said Band.  Feast on food from Blue Ribbon Barbecue and Jose's Torta Mexicana. Sip beer, wine or nonalcoholic refreshments. Buy tickets here >>  I did, for my wife and me. All ...
Read more

What do we do about Arlington's news desert?

Media
Dave Levy, a Precinct 18 Town Meeting provided this opinion about local news and Town Meeting: Click image to access >> During the time overlapping with Town Meeting, I learned that The Arlington Advocate had merged with the Winchester paper, effectively eliminating the Town of Arlington having a true local paper that has material financial support to cover local issues en masse. Later, it was reported over the Arlington Email List that the new Advocate & Star would not have a local re...
Read more

Letters to the editor
YourArlington's policy about letters to the editor UPDATED May 24: YourArlington welcomes opinions of all kinds from local residents, including those about the U.S. Supreme Court's view of Roe v Wade. Letters are reviewed for fairness, factualness and taste. This site welcomes letters about any issue that stirs the public mind. Longer opinion pieces are also welcome. NOTE: When emailing a letter to The Advocate & Star, consider copying YourArlington at the same time. Your opinions will ...
Read more