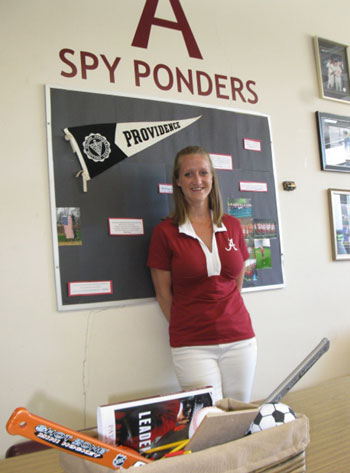 Melissa Dlugolecki in 2013, a month after she was     named athletics director.

UPDATED, June 5: Arlington police have concluded that an image of a high school teacher described by a local TV station as “racy” was not fake and that the Twitter account it came from was not hacked, as the teacher had described.

Melissa Dlugolecki, 34, who has been the high school's athletic director for five years, told school officials in January that a photo of her that appeared on the GoPonders Twitter account was not her and that someone must have broken into her account. But police have officially discounted her version of the events.

COST OF PROBE: The Police Department estimates in good faith that the cost of the investigation to be $4,338.24, which includes an estimated 96 hours of investigative effort directly connected to the various facets of the investigation, Jim Feeney, assistant town manager, wrote June 4 following a public-records request.

"This figure does not account for any costs associated with supervisory review," he wrote.

"The criminal investigation into the alleged unlawful computer access into the AHS Athletic Department Twitter account has been closed, and the allegation was unfounded," Chief Fred Ryan told YourArlington on May 26, referring to the claim that GoPonders account had been hacked.

School Superintendent Kathleen Bodie said in a statement May 28 "... that the preponderance of evidence suggests the image that had been distributed on the Twitter account was in Ms. Dlugolecki's possession.

In a phone interview May 29, Dlugolecki said her attorney, whom she declined to name, had advised her not to comment about the matter at this time. "There is more that I would like to share when I am able to," she said.  Dlugolecki has been placed on leave for what she said is an unrelated matter.

On Jan. 2, responding to a report that a photo had appeared on the school account, Principal Matthew Janger sent an email to students saying that a staff member had not posted the picture and that it was not a real photo of the staffer, who he did not name.

In early April, YourArlington received in the mail from an unknown source a copy of the tweeted image showing Dlugolecki smiling, with a white sheet covering her breasts but not her bare shoulders. Accompanying the photo were various unsigned documents, many of which could not be verified.

As a result of the investigation, Bodie said she is "following the statutorily required procedures for taking appropriate action. The employee who made the allegations has already been placed on leave.

"In addition, the Arlington School Committee has also taken action including updating and revising a district-wide social media policy, which among other things, requires the use of work/district email addresses in the creation and maintenance of all social media accounts. The final policy is expected to be implemented this fall."

The full statement, published below, does not specifically say what led police to draw its conclusion or why the director was placed on leave.

In a May 29 interview, Dlugolecki said she was told April 9, the first day of school break, that her leave related to a half-day yoga class she conducted in Watertown during school hours. She said she had administrative approval to do that.

A member of the administrators' union, she said she had not yet decided whether to file a grievance in the matter. Asked whether her leave has ended, she said the parties are "working toward a resolution."

She said Bodie's statement upset her, because she saw it as questioning her work ethic, something she is proud of. She called her approach to the world "kind," meaning she aims to serve others and that she feels "very good" about what she did over five years.

Known for her contagious enthusiasm she often wore Arlington High colors -- maroon-red, gray and white. In five years as athletics director for the public schools, she said she "loved the kids and the coaches" and "continually thought of ways to improve" the programs.

For Dlugolecki, the key question is: What comes next?

According to her blog, Thrive With Meldl, Dlugolecki is looking ahead. On a page touting her work in yoga, private coaching and events, she writes about working with a partner: "COMING SOON! I am SUPER excited to partner with my soul sister who happens to share my passion for helping people in an efficient manner AND she is an expert in the fitness and health industry.

"This format is a less intense commitment than individual coaching with content you can access from your home, car, office, train, shower ... whatever! Our goal: to help women build muscle, confidence and energy without little time commitment and zero commute. Limited spots- stay tuned!"

At the same time, Dlugolecki wrote May 30 in an email: "I am still very much invested in the work and athletic department programming. While restricted from being actively involved, I chose to delegate energy to another, temporary outlet of empowering people to meet goals, build confidence and incorporate health into their lives. It is something I am deeply passionate about and believe makes a positive impact."

Dlugolecki came to Arlington from a position in Hopkinton in 2013. In her five years in Arlington, she was known as an enthusiastic supporter of district sports as well as emphasizing sports leadership, via the captains' council.

"As you may recall, In January, an inappropriate image was posted to the Arlington High School athletics Twitter account, appearing to show Melissa Dlugolecki, the District’s Athletic Director, in a state of partial dress. Ms. Dlugolecki reported to school administrators that the photo was fake and that the Twitter account had been "hacked." In response to this report, we followed procedures and notified the Arlington Police Department, and members of the Police Department met with Ms. Dlugolecki and commenced an investigation.

"Just before the Memorial Day holiday, I was informed that the Arlington Police finished their investigation and concluded that there was no evidence of hacking or unauthorized access to the Twitter account and that the preponderance of evidence suggests the image that had been distributed on the Twitter account was in Ms. Dlugolecki’s possession. I am sincerely disappointed that a trusted member of our administration would mislead me, other administrators, our school community, and the Arlington Police, and I regret that her representations resulted in speculation about blame and the unnecessary investment in time and resources by the Arlington Police Department to investigate these misrepresentations.

"I take this misconduct seriously and am following the statutorily required procedures for taking appropriate action. The employee who made the allegations has already been placed on leave. In addition, the Arlington School Committee has also taken action including updating and revising a district-wide social media policy, which among other things, requires the use of work/district email addresses in the creation and maintenance of all social media accounts. The final policy is expected to be implemented this fall.

"As this is graduation week, the focus should be on the achievements of our graduating seniors. I am hopeful that the community will remain focused on our seniors and will celebrate their successes and not divert attention from our graduating class to the conduct of one employee, knowing that there is a process underway to address the findings of the investigation."

Part of  May 30 statement by Principal Matthew Janger

"... As you can imagine, this is personally upsetting as I make every effort to be accurate and responsive in my communications with the school community. I am extremely disappointed that we were misled, and it has been frustrating to be unable to communicate more ....

"An Athletic Director is a role model in our community and students may find this incident confusing or upsetting. If your student is distressed, please do not hesitate to contact our Deans or Guidance department and to seek support as necessary. We will follow up with students individually and in groups as necessary. Please feel free to contact me with questions.

"In Ms. Dlugolecki’s absence, we have worked with the athletics and coaching staff to keep spring sports running smoothly and to keep on planning for next season. For the time being, Rob DiLoreto, Fusco House Dean, is serving as the primary administrative contact for Arlington Athletics.

"Special thanks go to Jocelyn Siccone, Athletics Administrative Assistant; Amanda Mortelette, Equipment Manager and Coach; and Kierstin Merlino, Trainer. They have joined together to schedule events, transportation, and staff. I am truly grateful for their dedication and work to ensure a positive spring sports season for our students."

This news summary was published Wednesday, May 30, 2018, and updated May 31, to add a link, as well as June 5, to add cost. Marjorie Howard contributed to the editing of this story.

13Forest Gallery, which reopened at 167A Mass. Ave. on May 21 after it was displaced by a fire next…

13Forest Gallery, which reopened at 167A Mass.…

ACMi's latest on Ukraine: 'Journalist in a war zone'