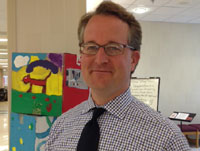 Three days after meeting the public, Michael Hanna of Marblehead has been named as the new Stratton School principal, and plans to start July 1.

In an email Friday, June 8, Superintendent Kathleen Bodie announced the appointment. Hanna is the principal of the Village School (grades 4-6) in Marblehead and the only finalist following a reopened search.

In a news release, Bodie said Hanna has accepted the position. The appointment means help for Sheri Donovan, who has been the principal of Thompson and Stratton for this school year. Work is underway on the $20 million Thompson School. Longtime Stratton Principal Alan Brown retired last June.

"I am delighted to begin leading the Stratton School. Dr. Bodie, the faculty, parents and students have all been welcoming and supportive already. I think it's going to be a great fit, and can't wait to get started! Anyone is welcome to leave a message for me at Stratton in advance of my starting on July 1st."

Hanna plans to visit the school this Friday, June 15, arriving at noon for lunch and will tour the building. He then plans to be in the playground at dismissal until 3 p.m. to meet with parents.

"We are very pleased to welcome Mr. Hanna to Arlington," Bodie wrote. "Michael brings a leadership style that is approachable and thoughtful, along with a good sense of humor."

Parents, teachers and administrators alike who met with Hanna felt that he would be an excellent match for Stratton, she wrote.

She thanked parents who attended the candidate forums during this process and provided thoughtful comments. She gave a special thank you to representatives on the Search Committee -- Chris Carmody, Leanne Rodd and Megan Caradonna.

Donovan was assisted in the current academic year by Jacqueline Daley, a lead teacher at Stratton, who served as administrative liaison.

According to a news report in February, Hanna said Marblehead's school superintendent told told him that his contract would not be renewed when it expired July 1.

Hanna brings a wide range of administrative and classroom experience to his new position, Bodie wrote. He has served Marblehead Public Schools in various roles since 2001, including classroom teacher, curriculum director and curriculum director coordinator. Since 2009, he has been the principal of Village School.

Hanna holds degrees from Seattle University, Boston College, and Endicott College. He is currently a Ph.D. candidate in Educational Leadership at Lesley University.

In March, three finalists to be principal of the Stratton School were identified, and they met the public in early April. None was chosen, and the search was reopened.

The three were Maureen Devlin, associate head of school of the Rio Grande School in Santa Fe, N.M.; Bridget Harris, who has been a principal, assistant principal, curriculum supervisor and classroom teacher in the West Irondequoit Central School District in Rochester, N.Y.; and Shamus Brady, an Arliongton High grad who is the interim assistant principal for the Clark Avenue Middle School in Chelsea.

13Forest Gallery, which reopened at 167A Mass. Ave. on May 21 after it was displaced by a fire next…

13Forest Gallery, which reopened at 167A Mass.…

ACMi's latest on Ukraine: 'Journalist in a war zone'